Kimberly was thrilled to be interviewed by Marcia James on the “Go Pets” blog. 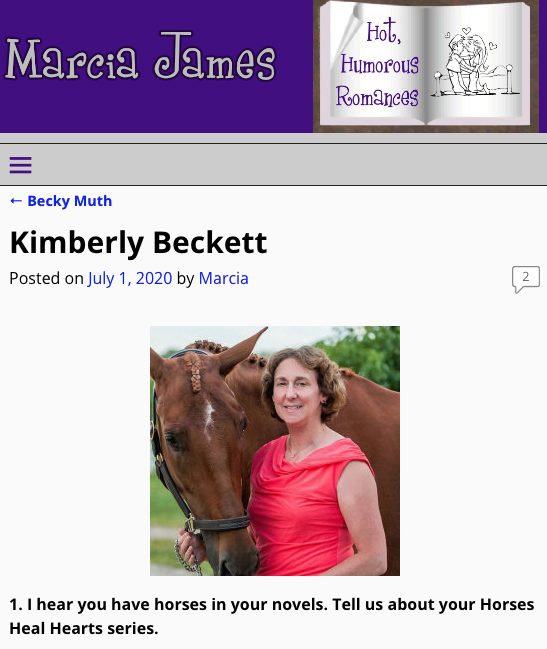 Horses Heal Hearts is a five-book contemporary romance series in which the hero and heroine meet in an equestrian setting.

A once in a lifetime horse, but only one of them can have him.

For very different reasons, Michael Stafford and Jessica Warren need the right horse to fulfill their dreams to compete in international dressage, and the black stallion Tempest is that horse. When Tempest’s owner requires them to compete head-to-head for Tempest, they discover the tension between them is not just about the horse, but about the strong attraction neither of them can deny.

Ian Stafford is a former British Special Forces war veteran who still has nightmares of a friend dying. When he sees a woman being threatened, he intervenes, and the woman escapes. But Ian accidentally stabs an attacker, who dies. Ian is charged with manslaughter, and the woman who can exonerate him has disappeared.

Megan Brady never imagined the thoroughbred colt her family raised would become a British Triple Crown contender. When the Irish mob approaches her brother with a bribe to lose the most important race of his career, he refuses. Megan tries to thwart the mob, but they attack her. If it hadn’t been for the man who saved her, she could have been killed. She must come out of hiding to exonerate Ian, but then the mob would find her. Meanwhile the date of the big race approaches.

Can Megan’s courage in the face of overwhelming odds help Ian come to grips with his grief and allow himself to live and love again? Will Ian be able to trust Megan with his heart?

Book #3, Lionel’s Leap of Faith, is set in the world of international show jumping:

He doesn’t know the mob has him in its cross hairs.

Lionel Hayes is shocked to discover a world-class jumper among the abused horses he rehabilitates. Unfortunately, the only man with the talent to ride that horse is not only the man of Lionel’s dreams, he has also been recruited by the mob to frame him.

One fateful decision had destroyed Lionel Hayes’ life and led to the death of his longtime partner and lover. But through his work rehabilitating abused horses, and the trust of one special horse, he realized he had to take responsibility for his actions. From that day forward, Lionel vowed to restore his image and resume the career he loved. In the process, he found the horse of a lifetime, Gideon’s Rainbow.

Monty Campbell was a rising star on the international show jumping circuit until he lost his horse to injury. Desperate for a replacement, he learned of Gideon’s Rainbow. To his surprise, the horse’s owner is also a perfect match for him, although the man stubbornly refuses to acknowledge it. How can Monty convince Lionel they were meant for each other? And will the sinister force that seeks to destroy Lionel destroy Monty as well?

Book #4, Her Forever Love, focuses on Therapeutic Riding and Book #5 in the series will be about polo.

2. Why did you create a series featuring horses?

Ever since I can remember, I have loved horses. I wore out 4 rocking horses before I was 5 years old, and as I got older, I read every horse story in print, from Black Beauty to The Black Stallion. It wasn’t until I got my first job as an attorney for the federal government, however, that I could afford to buy my first horse, and I haven’t been without at least one ever since.

I have been riding and competing in dressage for several years and have earned my United States Dressage Federation Bronze Medal. When I wasn’t reading about horses, I was reading romance novels, and my favorites always involved an alpha male hero riding a magnificent horse. Now I have found a way to combine my love of horses with my love of romance by writing my own version of equine-facilitated happily ever afters. I truly believe that Horses Heal Hearts.

In addition to horses, I have always been a dog person, but since my recent divorce, when my ex-husband took custody of our two adopted off the track greyhounds, I’ve decided to adopt a cat from a local rescue. Wish me luck!

3. What drew you to writing fiction?

I have always been a planner, so my approach to writing is to outline my plot before I even begin to put pen to paper (figuratively)–I’m all about my laptop and word processing. LOL. I enjoy learning about the craft of writing and am always taking classes to improve my skills as a writer. I think if you read my entire series, you would see the quality of the writing improve over time. As I said above, I work full time, so my writing time is evenings and weekends primarily. I try to release at least one but hopefully two books in a year.

4. Tell us about your kudos or reviews.

My favorite review is of my first book, Dressage Dreaming, from Uncaged Book Reviews:

“I’m always happy to read a book when it centers around horses and this one did not disappoint. The characters are well developed and the romance develops nicely between our two main characters. For different reasons, both Michael and Jessica need a horse named Tempest, a talented stallion that could bring their careers back to the International level, and the seller agrees to send the stallion to Michael’s farm for both him and Jessica to work with before he makes the decision who to sell to. But neither counted on falling in love…”

5. How do you promote your books?

My books are available on Amazon and Barnes and Noble, and I also offer audio book versions of all my currently printed titles. You can get free promo codes for my audiobooks at http://www.freeaudiobookcodes.com Just search the titles.

6. Where can readers learn more about your books and connect with you online?

My website is the best place to learn more about me and about my books.

Marcia James: Thank you, Kimberly, for stopping by my Go Pets blog! I look forward to reading your novels!